Approximately 10 species of blackbirds occur regularly throughout the Nearctic region of the world. Some of the most common species include the Brewer's blackbird, red-winged blackbird, rusty blackbird, and yellow-headed blackbird. While each species differs slightly in their nesting and feeding habits, most blackbirds share the same coloration and flocking behaviors. They are common pests of farmers and gardeners as they feed on a number of seeds and crops. 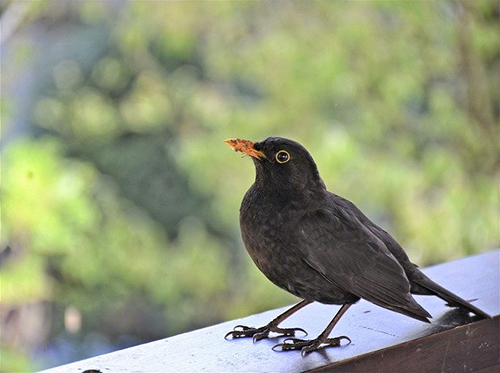 Male and female blackbirds vary greatly in appearance. Where males typically have black, midnight-blue and greenish iridescent plumage, females tend to have duller coloring, most often appearing brown. Depending on the species, males might feature an additional splash of color. The red-winged blackbird, for example, has patches of scarlet feathers on each shoulder. Blackbirds have bright yellow eyes, long legs and black beaks.

Able to adapt to a wide variety of environments, blackbird nesting sites are frequently found in coastal scrub, grasslands, riversides, meadows, lawns, golf courses, parks, city streets, marshes and crop fields. Some species, like the red-winged blackbird, prefer to live in close proximity to water. Blackbirds feed in large flocks and may roost in congregations of a few birds to over a million.

Are blackbirds known to enter homes or yards?
Though they rarely roost inside homes, blackbirds will absolutely take up residence on lawns, parks, golf courses and the like. Blackbirds are omnivorous and eat a variety of seeds, grains and insects. They commonly forage for ripening corn, sunflowers, citrus fruits, rice, beetles and earworms. As such, farmlands and lawns with gardens make especially favorable nesting sites.

Do blackbirds harm people or property?
While their presence can be beneficial since they eat a number of damage-causing insects, blackbird populations are mostly harmful to agricultural crops. As they often feed in large flocks, blackbirds are capable of devastating entire fields of corn, rice and other crop plants. Additionally, they leave behind collections of droppings, which may contain harmful bacteria.

Though no single solution is entirely effective, exclusion methods can be used in conjunction with one another to reduce the possibility of blackbird feeding and roosting. Covering fields of crops or gardens with mesh netting is perhaps the most efficient way to deter blackbird feeding. Though time consuming, scare tactics, like the use of frequent loud bangs or reflective tapes, also have favorable results.

Various species of blackbirds become aggressive when they feel their nests are in danger. Red-winged blackbirds, for example, will attack horses and even people they feel threaten their territory. As such, individuals should not attempt to approach populations of blackbirds. Instead, contact our Critter Control technicians who have the tools and training to remove the birds in the safest way possible.

We can help you get rid of blackbird problems.

Request a Quote
Blackbirds
The term blackbird loosely refers to a diverse group of about 10 species of North American birds that belong to the subfamily Icterinae.
Call For A Fast & FREE Phone Estimate Today
812.260.1239
(No Cats & Dogs)